"Welcome aboard Alaska Airlines service from Oakland to Seattle."

Finally Friday evening, the school is over and we are off to Oakland airport. Quick self checkin, fast security check and only a 20 minute wait at the gate and we were set to take off.

The engines roared and we could feel the familiar drag you can experience every time an airplane takes off. After a very short climb into the night sky over Oakland we stopped climbing and cruised on a fairly low altitude. I wondered why, maybe due to heavy traffic in the Bay Area. We stayed at the same low level for at least 5 minutes and the engines seemed to be at a very low power level. At this point I knew something was wrong.

Some moments later we heard the voice off captain Tim telling us that we had been hit by a bird shortly after take off. According to him, this had caused a failure in all instruments on the captains side and so the copilot was flying with the remaining systems. He said that he had declared an emergency and that we had to go back to Oakland immediately. This plane was going nowhere that night.

At that moment we felt the nervousness among all the passengers, everyone was talking. A minute later, this noisy atmosphere changed into a focused, concentrated silence.

After flying for 20 more minutes over the Bay Area with a lot of turns, we finally approached Oakland airport again. Then we touched the ground surprisingly hard, that hard that the airplane pumped up back in the air. Looking out of the window we made out the lights off all the emergency services waiting for us, while we got down again to definitely land this time. But in the end apart from the bird nobody got hurt. 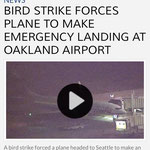 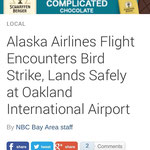 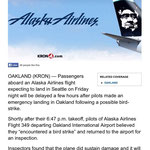 Back in the airport we waited for more information. Another airplane was on his way to Oakland to pick us up but id would not be here before 11pm. Thats why we were given a 12 dollar voucher for eating and told to be back by 11.30. Thanks to that we had time to discover the entire Oakland airport, which turned out to be pretty large to walk through but also pretty boring.

A few minutes past midnight, we were back in the air, astonishingly with captain Tim and his entire crew again. This time we had a smooth take off and so we were once again on our way to Seattle, where we arrived after 2 more rather bumpy hours.

Unfortunately the Oakland ground staff told us, that Seattle public transport runs 24 hours, but it turned out not to be true and at two o'clock in the morning, the Alaska Airlines Customer Desk was also closed. However at the end we arrived at our hotel around 3 o'clock.

Checked in at the hotel, the first thing we did before we went to sleep was to go out for a walk around the cold, empty downtown of Seattle. This was the first time in the pre christmas season that I felt like christmas coming up with temperatures about 0 degrees and all the trees and the streets sparkling with beautiful Christmas lights. This was such a good feeling and a perfect end of our long day.
tagPlaceholderTags: Westcoasttrips